If I get sued by Kiwi for this blog post, I just want to say it's been fun.

Truth be told, it's not a shoe polish I've ever been mad about. I just can't stand the smell of kerosine. So.. sod it:

Crap or not, there's a tin of the stuff in almost every home: tucked away in a cupboard drawer, sitting under a laundry sink, or rusting gracefully in a backyard shed.

Founded over 100 years ago in my hometown Melbourne, Kiwi is one of the most iconic brands to come out of Australia and remains the most widely used shoe polish in circulation today.

At just $5 AUD a tin, you can understand the polish's appeal. The question begs, however, is it any good? Will it damage better quality leather? Is it safe!? Not much is written on the matter, so let us then delve into the pasty depths of a black 38g tin.

The basic ingredients of shoe polish What is inside Kiwi's Black Shoe Polish?

Gone is the heavy naphtha. Gone is the Stoddard solvent and its awful kerosine smell! Things are looking up.

The ingredients that make up Kiwi's black shoe polish are no secret - they're published by parent company SC Johnson on their website. It's quite a bit different to their former mixture.

One draw back is that no volume is given. However, as a guide, previous studies that have looked at kiwi polish and other paste polish products tell us that on average a solvent will make up around 70% of the mixture, while wax is at around 25%.

The Natural Waxes comprise of carnauba wax, one of the hardest natural waxes available; and Montan wax (Montan Acid Wax and Glyco Montanate), known for its intense gloss. Combined, these waxes deliver the protection and shine you'd hope for in a tin of shoe polish.

The Mineral Waxes are both refined from petroleum. Unlike Heavy Naphtha, Paraffin Wax and Microcrystalline Wax are safe and odourless to use.

Paraffin wax is a hard wax that has strong water-proofing properties. Its draw back is that it's a little too brittle. Microcrystalline, on the other hand, has a finer molecular structure and is more flexible. Its fine structure also means it binds well to oil, making it a good emulsifier. Combined, they perform very well on leather.

The British Museum developed their own microcrystalline wax to replace beeswax and carnauba for the restoration of precious artwork. Microcrystalline is considered one of the most stable stable waxes available.

Solvent Dyes - I'm not a fan, but I understand why Kiwi might uses them. Leather shoes produced at scale often have had their top layer removed to hide leather imperfections and are replaced with some sort of artificial layering - many consumers don't even realise this. Because solvent dyes work well on artificial surfaces, such as plastics, it allows Kiwi to service a broader market. Solvent dyes also have greater colouring power than pigment, making them more cost effective.

C.I. 50415:1, or Solvent Black 7, is a dye that has been chemically treated to act like an oil-soluble pigment. It has a nitrogen base with a bluish-black hue that is usually obtained by heating aniline/aniline hydrochloride, nitrobenzene or nitrophenol in the presence of iron. Dye doesn't scatter light well, whereas one of the appealing features of a pigmented shoe polish is that the pigment sits on the surface and can change the hue of transmitted light, which can give the leather a beautiful depth with nuanced changes in different lighting conditions.

C.I. 11021 is an organic aniline compound with a reddish-yellow appearance, also known as Solvent Yellow 56. Given it is used to dye hydrocarbon solvents, e.g. paraffin, I am guessing it is added to help the main dye bond with the polishes' paraffin, m'crystalline, and C13-14 Aniline ingredients.

Oleic Acid. This is my favourite ingredient. It is a naturally occurring, non toxic fatty acid. As far as solvents go, it’s pretty weak - its partner-in-crime PCBTF is 12x more powerful. Oleic Acid's strength is as a ‘surfactant, or surface cleaning agent.

This is how it works. Oleic Acid acts sort of like a magnet. One pole is water-loving (hydrophilic). The other pole, which is longer and double-bonded, is water-hating (hydrophobic). When applied to a leather's surface, the water-hating pole attracts stubborn oil-based matter and grabs on them for dear life. At the same time, the water-loving pole is being attracted away by water. This creates enough tension for the soiled particles to be dislodged from the leather's surface, which can then be easily wiped off. If it sounds familiar, it probably does. It's the same concept for soap.

Kiwi notes that "In certain products, this (oleic acid) ingredient is used to dissolve certain types of dyes." Given Solvent Black 7 is very soluble in oleic acid, I would suggest that 'certain products' mean this one.

1-chloro-4-(trifluoromethyl)benzene (PCBTF) tag-teams with Oleic Acid as cleaning agent.  However, this ingredient relies on good old solvent power. Using its "Kb value,", a measure of relevant solvent strength, we can see that it is similar in strength (Kb 64) to Turpentine oil (Kb 55) and d-limonene (Kb 67), both respected solvents used in higher-end polishes. Evaporation rates are also relatively similar. PCBTF is noted for its capacity to dissolve large quantities of non- and low-polarity molecules, such as oil, fats, and other soiled matter. Unlike its predecessor, Stoddard solvent, PCBTF is free from the nauseous kerosene smells.

C13-14 Alkanes is a "solubiliser," which might sound like a droid out of Star Wars, but is in fact a synthetic blend of hydrocarbons (alkanes) that helps bind all the ingredients together (like m'crystalline); with the added benefit of simultaneously increasing the solubility (ability to dissolve) of the waxes and dyes.

GENERALLY SAFE TO USE WITH PROPER PRECAUTIONS 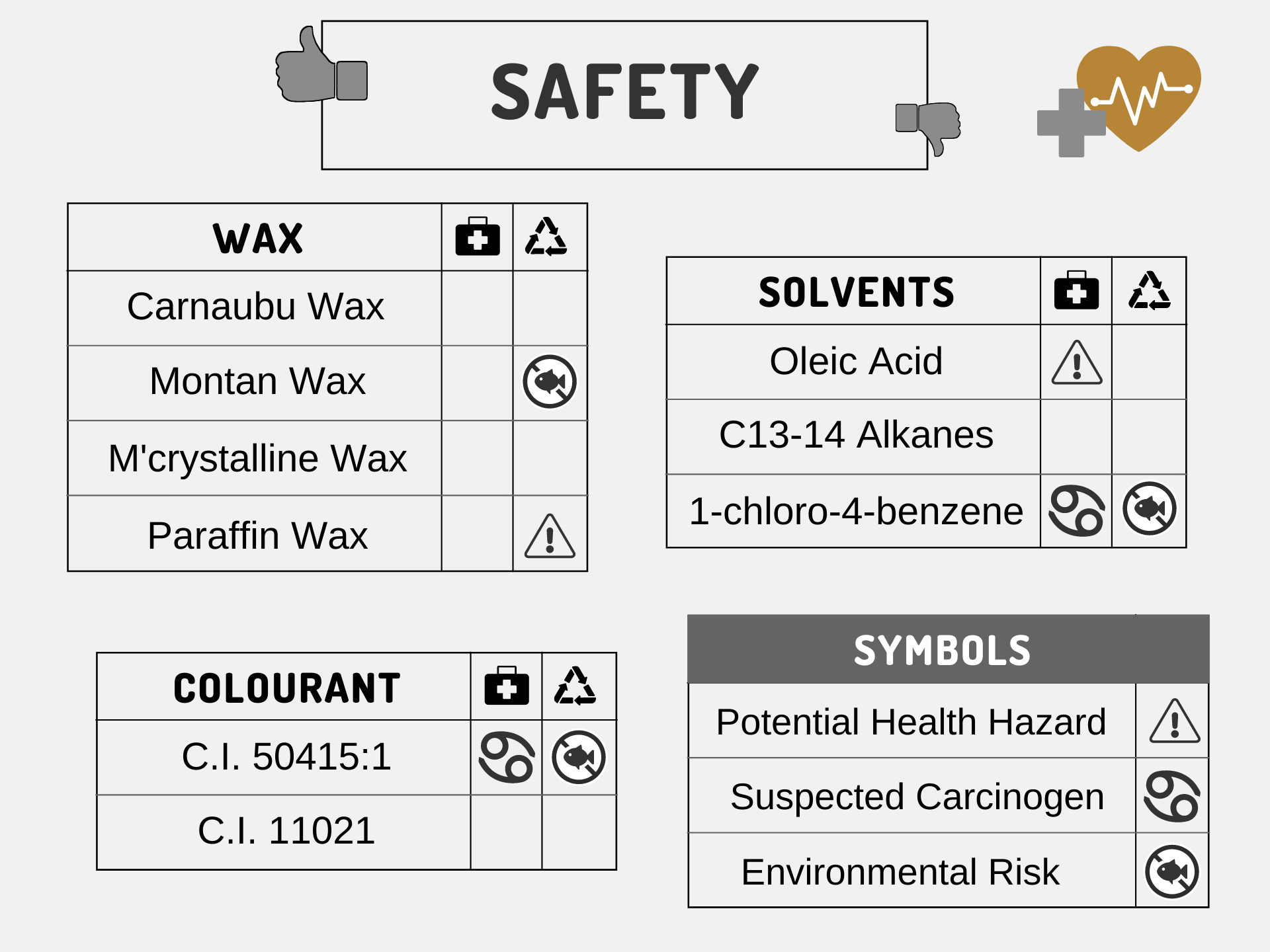 I spent a bit of time looking up, fact checking, then double checking the information presented in this section. This information was primarily derived from the National Centre for Biotech Information, European Chemical Agency (ECHA), as well as published online safety sheets or wherever the trail led me.

The most commonly cited health hazard was moderate to severe irritation to the eyes, skin, and respiratory system. Some of the ingredients are obviously toxic to eat, so I wouldn't suggest using it as a Vegemite - arguably less appealing.

The next bit of information is in question. ECHA has listed some pretty serious health concerns relating to Solvent Black 7. Specifically, the dye's nigrosen base and a very toxic compound known as Nitrobenzene. Better produces use the safer alternative Nitrophenol, and I suspect this is what Kiwi uses, but it seems that any dye with this name is tarred by the same brush.

Another possible point of muddle is in its name. Solvent Black 7 is sometimes confused with the similarly named "Pigment Black 7" (C.I. 77266). This particular dye is listed by the FDA as carcinogenic. ECHA has a fact sheet on C.I. 77266 but doesn't mention that it is listed by the FDA, and more curiously, doesn't highlight the fact that it is a restricted substance in Europe.

The State of California added PCBTF to its list of known carcinogens. This followed a two year inhalation study of rodents that found an increase risk of tumors in liver, thyroid glands, lungs (male) and the uterus (female).

The State of California estimates that continuous lifetime exposure of 1 μg/m3 (1 microgram per m3) PCBTF will cause 8.6 additional cancers per million people. Someone smarter than me should work out how much PCBTF vapour is released during an average polish session and do a risk assessment based on the opaque lifetime exposure value above.

My sense is that the tin is too small, and its vapour release too slow, for people to really panic. I'd just be aware and use the polish in a well ventilated place ..  or outside, with sunscreen of course - a far better strategy for avoiding cancer.

Four ingredients were identified as being toxic to aquatic life with long lasting effects.Take note sailors. Overall I think Kiwi has improved the ingredient profile. Will I go out and buy up tins of the stuff? Probably not (I just like my Boot Black and Pure Polish too much), but it's not "crap" as I first suspected. It will do the job. In this blog post we looked inside a tin of black Kiwi shoe polish. We wanted to know if you could get a decent shine out of it, if it would harm the leather, and indeed whether it is safe to use? Here's my thoughts:

Kiwi Polish uses wax ingredients that will leave a decent mirror-esque shine. You will find it challenging to achieve a true glacage shine: either there is not enough wax content or the solvents are chemically bulling the applied wax layers. Without knowing ingredient volume, it's impossible to say conclusively. The solvent dye will lift fade in the leather but without the same lustre as a better quality pigment polish. For an example and comparison, check out this 'Kiwi vs Saphir' video by the Elegant Oxford. At $5 (aud) a tin it does the job and your black leather shoes will look pretty decent.

As for using it on better quality, full grain leather I cannot pick out one individual ingredient that will do direct harm.. On the other hand, it is an assessment based on the parts and not the sum thereof. Nevertheless, you might find these observations useful.

Ingredients have a more acidic profile. The pH level of the old Kiwi mixture was between 7.5 to 8.5. The leather upper has an acidic pH profile in the generally accepted range of 3 to 6. Outside of this and the leather is unstable. To put the old kiwi mix into context, there is a tenfold increase in alkaline when you increase by one value. That means the old Kiwi Polish was on average 1,500 times more alkaline than what you would want it to be. Leather that is highly basic (alkaline) will eventually bubble, blacken, and breakdown. It is true that leather becomes more acidic as it ages, but wearing leather shoes also has an alkali affect. While sweat is absorbed into leather in an acidic state (Ph 5.2 to 7), it has been found to turn alkali as it cools, with a pH as high as 9. Some updated information from SC Johnson would be beneficial to them, as I suspect it is now within a more conducive pH range.

Only using Kiwi Polish is not a good long-term strategy. Water-retention is very important for your leather uppers, because it modifies the properties of the leather's collagen-based tissue, making them more supple, more elastic, more resilient. Water is also directly related to pH levels. It is therefore important to use fatliquouring agents such as those found in good shoe cream in order to encourage water retention. I'd suggest a lick of shoe cream prior to using Kiwi shoe polish. Not too much mind you, as too much fat causes the fibres to dispel water, with obvious results.